I’m definitely not the most disciplined person around when it comes to blogging—and dieting—but in order to make my food scribblings more consistent on this space, I decided to feature on-the-go photos taken with my iPhone and add them to this space. I’ve amassed a lot of photos in the tiny device, so I hope to pen down some of the culinary inspiration that strikes me whenever I’m out and about in a new section called “Food Cubes”.

Kai yang Wichian Buri | Kai yang (grilled chicken) is a Thai staple, but the district of Wichian Buri in Petchabun province has rose to fame by being associated with the grilled birds, so much so that many kai yang stalls will declare their style as Wichian Buri. Just a stone’s throw from our apartment in Bangkok lies one of the most superb kai yang vendors we have tried. The grill fashioned from an used oil tin and corrugated zinc may not make the most appealing setting, but the smoked birds that come out from this stall are just yummy.

Coconut ice-cream | Coconut desserts are aplenty in Thailand, but coconut ice-cream remains my favourite. I was walking the talaat nat (makeshift market) in the neighbourhood one evening when I had a sudden craving for coconut ice-cream, so I bought one and enjoyed 10 minutes of heaven as I browsed the stalls.

Khanaeng | I first tasted khanaeng, or cabbage sprouts, at our favourite neighbhourhood restaurant, and since then I’ve found these vegetables the size of a child’s fist at the local fresh market and learned to replicate the same dish at home. How not to love these Brussels-sprout lookalikes, especially after they are stir-fried with minced pork, chillies and a liberal dose of Shaoxing wine?

Eggs | Interestingly, eggs are one of the most sensitive markers of rising expenses in Thailand. In the six months since I moved back to Bangkok, the prices of eggs at the local market have been constantly inching up. The smallest and biggest eggs at the market used to cost 38 baht and 41 baht respectively just earlier this year, now the prices are hovering between 41 baht and 44 baht. Inflation—it’s happening everywhere. 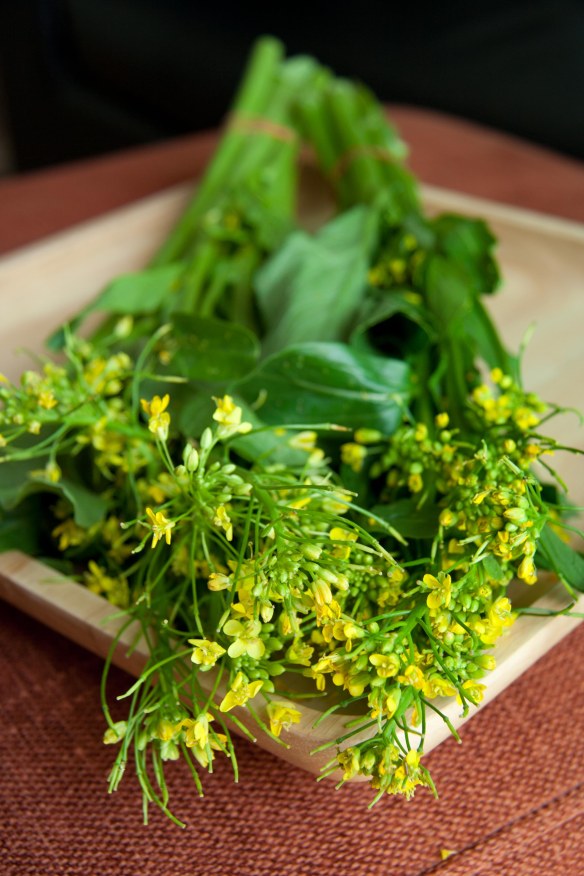 You know how they say girls will start becoming like their mothers as they grow older. Now I’m beginning to believe that too. Browsing the stalls at the fresh market in my neighbourhood today, I came upon stacks of phak kwaang tung* (ผักกวางตุ้ง), whose vibrantly green stalks adorned with bright yellow flowers called out to me. “Hmm, these vegetables are too lovely for me to pass them up,” I thought to myself. Even though I had already planned the night’s dinner, I couldn’t resist buying two stalks of phak kwaang tung — and for a song too at 20 baht — to cook them the following night. This gesture so reminded me of my mum, I mused as I trotted home with bags laden with other purchases from the market. When I was still living at home with my parents in Singapore, the vegetables we ate were dependent on what caught my mum’s eye at the market that particular day. Often, when she came back from her marketing, she would declare, “The cai xin looks so fresh and pretty today, so I bought them to cook for dinner tonight.” And the amusing thing, I realise, is that vegetable shopping isn’t the only aspect that I’ve picked up from my mum…